I’m trying to duplicate within fvwm the settings that are available from ubuntu. When I click on the top right wrench in ubuntu, I see a fully populated set of options for bluetooth and sound, etc. In principle I should be able to see the same set of options from the command line by typing sudo gnome-control-center For some devices this works, but not for the ones that are the most important (bluetooth and sound). The screenshots below illustrate the issue. (Sorry for the terrible resolution). The images on the left are what I see in fvwm, those on the right are the ones I should be able to see (and have to exit fvwm to get to) Could anybody advise please how I can get the full functionality of the control-center from within fvwm? Thanks very much for your help 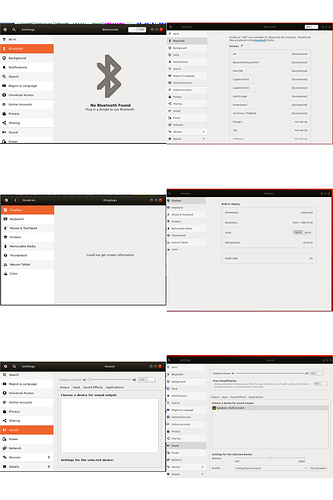 Last, I suggest finding a different solution if you want to run fvwm. If using fvwm, don’t use the gnome-control-center, instead find other applications that are desktop independent for configuring your devices. There are various apps for pulseaudio that you can run and configure your sound, such as pavucontrol. There are also apps that can run in a systemtray, such as pasystray. For bluetooth, a desktop independent tool such as blueman may be useful.