I’m trying a few different things to see if I can’t get IntelliJ Idea to behave with my FVWM setup. From reading, I gather that IntelliJ specifically and Java in general have these sort of issues in FVWM, and am working through some of those fixes and hacks to see if I find something that work better than what I’m getting now.

However, I’ve hit a hurdle where I’m having trouble getting the Style command to apply to the IntelliJ window. xprop shows me that while WM_NAME changes per-project, WM_CLASS seems to be static, so I’m trying to use that. But it’s also showing me what I believe is an array, rather than a single String.

So I grabbed one of those, hoping I only needed to match any, and added this line to my config:

Originally, the two middle FP styles were a “MouseFocus”, and “FPLenient” was “Lenience”, but it seemed like the man page says FP is the new way to go, so I tried it. The BorderWidth 10 command was only there because I began to suspect none of my changes or attempted configs were taking effect. And indeed, when I put that in, the application border did not increase. So my question is, is there a way I can use the WM_CLASS I’m getting from xprop to apply a style? Or do I need to find another way to identify the window?

You should be able to use WM_CLASS. What does FvwmIdent say the class of the window is? 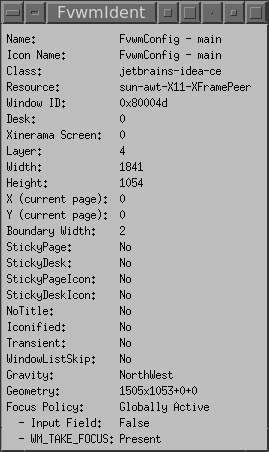 It appears that the two strings are just resource and class. Anyways that Style line should work and be matching the window correctly.

The issue might be that you have handles on the window, in which case BorderWidth will have no affect (see manpage). Try using another style to ensure it is matching correctly, such as adding HandleWidth 10 as well to the list of options.

Ah, I didn’t know that. I was under the impression BorderWidth was the visible edge to the window, while HandleWidth was how much of the edge was able to be grabbed for resize. I’ll have to re-read that manpage.

Adding HandleWidth 10 to the line seems to have worked. So at least I know the style line is applying, although I have to restart FVWM for it to take effect. Typing it in FvwmConsole doesn’t seem to have any effect, which may explain the other forum post I’ve had open for a while now, but that’s a different topic.

Thanks for the assistance and info.