I found one interesting config by taviso. Cannot get it to work. Any help? On Fvwm Beginners Guide - Advanced Functions scroll down to the end. Here is an example of what that menu will look like.

What isn’t working? You do have both xwd and imagemagick installed?

Looking at the function, I notice it uses a bad environment variable (I was a bit of a noob when I wrote that), and you should use $[FVWM_USERDIR] vs $[fvwm_home]. You also need to make sure you have created the directory $[FVWM_USERDIR]/tmp or adjust that to point to a tmp directory to store the .png files in. If that directory doesn’t exist, the shell script will most likely fail.

You do have both xwd and imagemagick installed?

xwd and imagemagick work fine. I am using this thumbnail sample in another config. Also did a test if the problem is with Fvwm3 by running 2.6.8. Cannot get the menu to appear (I am using FvwmConsole).

What about my other comments? Did you both update the environment variable (in two locations) and ensure that the tmp directory you are storing the .png files in exists?

What about my other comments?

Did the correction before you posted. When running the config, no thumbnails appear in /tmp.
I am assuming the problem is WindowID. Not familiar with this command. How to test if it works?

The thumbnails should be in $[FVWM_USERDIR]/tmp not /tmp, if the .png images are not in the desired directory, the issue is the xwd command piped to convert not creating these images, so you may want to manually test that part from a shell.

You can use the man page, though it appears the man page calls it WindowId, though fvwm is not case sensitive, this won’t matter. Here is the output of the man page from 2.6.x – basically it is a conditional that runs an fvwm command on a specific window:

The excerpt of the man page that you posted, I read earlier. When I run the example in FvwmConsole,

… nothing appears. Do you have one simple config with WindowId? Another question, does WindowId require a dependency package that may be missing in my system?

Got the FvwmExpose to work. I forgot its an AddToFunc. At the end of config, to add FvwmExpose.

Or add it in a binding or menu. This would be good to include in the Beginner’s Guide, as well as change the variable.

The Beginner’s Guide is out dated and I don’t want to go through and update all the environment variables that are not nicely used (the guide defines these new variables, but overall this isn’t the best way to go about things). As for your config, I do hope that those who use that function understand it is a function. If you want you could write up a page for the FvwmWiki on it, and maybe add comments about how this function can be bound to keys/mouses/FvwmButtons/and so on. But I don’t think adding FvwmExpose to the end of the block will help make it more usable.

I had a closer look at Taviso’s config. It’s good and useful with a minor edit. The filter selects items to expose, cleaner with CurrentPage, $[w.class] instead of $[w.name], and $[page.nx] - $[page.ny] in the title + binding. With the thumbnails and customization, it’s better than WindowList. 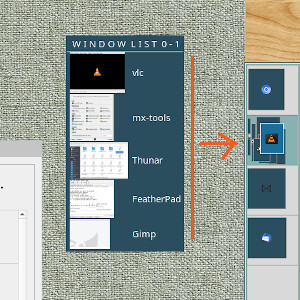 It would be good also to filter file extensions, such as !*.sys but could not find a variable for this.

Edit: Took me a second to get the above to work. It should be noted that it needs to be called with NoWindow first.

This is the config I am using without “NoWindow” in mouse binding. Folder cache/ included.

Edit: This may be a problem with firefox, as I can’t reproduce it on other windows that are the same application.

You shouldn’t use environment variables, instead use InfoStore if you want to store local variables inside of fvwm.

Edit: This may be a problem with firefox

Also with Chromium, thumbnail shot overlaps with other windows.

This is not the problem. Change PipeRead "echo Lower; to "echo Raise; as per Taviso’s original. I changed to Lower because Raise lowers the front-focused window. Changes the window layer order which looks confusing. I am still searching for a better solution.

Yeah. This at least stores the current window in CURRENTWINDOW and raises it again after the menu is built. It doesn’t preserve the layering of the other windows though.

Not the best solution but better if the front-focused window, which is lowered to the bottom, could raise again at end of the script. How?

That’s what the above function does. I use WarpToWindow, but you could use Raise. If you close the menu before making a selection it should focus back in to the previous window.

In my hurry, I didn’t see your config. Did a test. It keeps the order, uniformed thumbnail size, but does not allow to select the preferred window.

You mean selecting windows from the menu doesn’t do anything? If so, that’s odd. It works for me (keyboard focus).