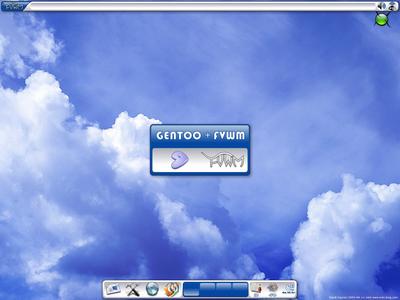 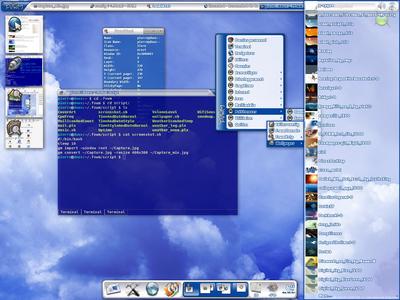 Nothing really new from the other configs I’ve seen in this forum, especially if you’re familar with the one from Jefklak from which I’ve taken a lot (

). The only few mods I’ve added are:
[list][]Icons are drawn from a gnome icon theme. Thus, a simple variable modification and if the new gnome theme holds enough icon, make my Fvwm theme change all its icons. The current icon theme displayed is Gnant.[/:m]
[]Wallpaper are set and kept by using a symbolic link.[/:m]
[]Mail icon notification is based on a PERL POP3 script and it comits a sound on every new mail (via esd, my sound server). The current theme sound is Borealis (the OGG one).[/:m]
[]The weather icon is based on a PERL script but this feature is not completely finished (it bugs a lot). I’ve embedded several weather icon theme taken from a gDesklet named iWeather (thanks buddies!)[/:m]
[]3ddesktop is used to go from one desktop to the other (the spinning effect is really awesome)[/:m]
[]Hour and date scripts have been merged into one single file FvwmScript[/:m]
[]My Thumbnail function, pasted from Taviso’s one, use GraphicsMagick (almost equivalent to ImageMagick)[/:m]
[]For acceleration purposes as well as disk life saving, most of the termporary files (thumbnails, weather logs) are stored under the virtual memory flie system (tmpfs aka /dev/shm)[/:m]
[]The complete config has been divided under small ones (under conf) for readability[/:m]
[]The chosen Colorset matches the fvwm-theme policy to ease the integration with it[/:m]
[]This configuration will accept other themes and will allow fast switch between them by using a simple variable[/:m]
[]The current theme name is called “Arctic” and it’s my 1st pixmap theme[/:m][/list:u]

What are you using to get the terminal ‘tabs’ in your terminal? Are those really tabs to get multiple virtual terms in one terminal window?

What are you using to get the terminal ‘tabs’ in your terminal? Are those really tabs to get multiple virtual terms in one terminal window?

Nope, it’s not the FvwmTabs module. It’s a feature of the term itself. The term is called MRXVT, a real marvel.

If you require some help on its configuration, just post me.

The windowsdecorations are very nice, but the menu…it just rocks…

Keep it going like this, and don’t forget to post your theme to fvwm.org when you’re finished, I think they’d be very glad to include it

Thanks theBlackDragon. I’m currently working on a full pixmap theme that I will post as soon as some results show up.

pem, I love your config, and have several questions:
Can you post your .mrxvtrc? I’m having trouble getting tranparency to work.
Also, while I’ve merged 3ddesktop & haven’t changed the entries in your config, it doesn’t seem to be working. Is there any addional config that needs to be done?
Thanks!
Jerry

Can you post your .mrxvtrc? I’m having trouble getting tranparency to work.

Actually, I store its configuration under my ~/.Xdefaults. Here it is:

Also, while I’ve merged 3ddesktop & haven’t changed the entries in your config, it doesn’t seem to be working. Is there any addional config that needs to be done?

Yep, 3ddestop reads parts of its config under a general configuration file named /etc/3ddesktop.conf. Here are the relevant part I’ve set up:

pem:
Thanks for the config info!

For the weather forecast, I use a borrowed and modified PERL script that you will find under my conf. It’s named ~/.fvwm/script/weather_log.plx. It digs the forecasts from weather.com:

If you mean the dock bar, just have a look at my conf file named ~/.fvwm/conf/dock.fvwm2rc.

For the digital clock, you have multiple choice. My preferred one would be to adapt a FvwmScript and use an XFT font that matches a digital clock. I’ve stored several version of my Date and time script under my conf (in .fvwm/script/):
[list][]TimeAndDateNormal should be easy to adapt and should do the trick with an appropriate font (I’ve stored an old config with it, here)[/:m]
[]TimeStyleAndDateNormal is the clock and date script that you can currently see in my screenshot[/:m]
[]TimeAndDateStyle is a clock and a date with this stylish and cool layout I’ve taken from a Mac clock.[/:m][/list:u]
Just one last thing, if you take my conf tarball, be carefull not to scratch yours.

I’ve noticed this on a lot of configs I’ve seen lately, how do people get the shading effect under windows? Mas OSX style (and e17) shadows on fvwm screenshots! It’s got me excited!

If you got the true transparency under MRXVT (named opacity in its man), it means that you’ve set up xcompmgr. This is this thing that enables the true transparency as well as the shadowing effect. You can even turn the transparency on other thing such as my calculator in my shot (use transset for that, it’s under portage (oups … I’ve made some ad for Gentoo)). My current xcompmgr setting, the one you see in the shot, is launched by Fvwm and takes the following variables:

I to everyone , I’m totally new to this scenario , I’m try to get the most excitenment wmanager onthe net.But , I’m just at the bginning , so my apologises for my stupid questions…I’d like to get the theme of Pem and his configs , so I think , before , I have to get the fvwm packet (2.5.12) and after moving on copyng the config right!!!
I got a small gentoo on my machine so I’ll start my emerge…

P.S. I must emerge ImageMagick too??

No prob paperp. I’m kinda new too, considering the age of Fvwm (started in 1993). I’ve started using Fvwm, 5 months ago.

For the pictures tools, I’ve chosen GraphicsMagick. It’s almost the same as ImageMagick but a little bit faster and with a more standardized interface … as the say (it’s in portage and the ebuild is called graphicsmagick).

If you want to get a hand on this marvel of a wm, you should have a look to this Fvwm Beginners guide. I’ve started with it: it’s very well written and I still use it.

Thanks in advance!!
No Problem if for the moment(I’m just reading fvwm beginners…

)I leave on compiling emerge with fvwm-themes , and after I use the manual config??

Thanks in advance!!
No Problem if for the moment(I’m just reading fvwm beginners…

)I leave on compiling emerge with fvwm-themes , and after I use the manual config??

You don’t need fvwm-themes if you’re planning on using someone’s config (or writing your own).

Pem thanks… but i liked to put weather in my root menu it’s possible ?!
if you know how and can tell-me i apreciate that (or a FAQ, it’s be usefull too).
Thanks